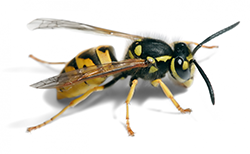 Biology: Wasps are social insects and live in nests or colonies. Typically, only inseminated queens over winter and do so in sheltered places. She will begin to make a few cells in a small nest to begin a colony. One egg is laid in each cell and the queen feeds the developing lava. After about 30 days the first 5-7 workers emerge and shortly take over all the work except for laying eggs. Nest size varies and averages 2000-6000 cells. Nests usually contain 1000-4000 workers. The founding Queen, the workers and males all die during the winter the new queen will hibernate over winter.

Habits: Depending on the species, the over winter queen will usually select either a subterranean or aerial nesting site. The German wasp (common wasp) normally nests in buildings. There are usually guards near their nest. Some people become hypersensitive to their stings and future stings can become life threatening. Those nesting in buildings are only a problem when the nest or nest entrance is located near human activity.

Treatment: Wasp nests are treated with a powdered insecticide called Ficam w, this is injected directly into the nest if it can be located. If the nest itself is hidden away out of site, then the entrance & exit holes used by the wasps are treated, the wasps then walk through the insecticide taking it back to the nest.

Call now for a competitive price.